This tag is associated with 2 posts

Nigeria’s 2015 presidential elections are due to hold in a couple of days, barring any last minute changes to the rescheduled date, March 28. The poll was initially scheduled for February 14 but deferred due to ‘security concerns’, as stated by the Independent National Electoral Commission (INEC). The postponement was not a welcome development to the All Progressives Congress (APC), the country’s strongest opposition political party, considering the massive momentum and traction gathered ahead of the planned February 14 date. The ruling Peoples Democratic Party (PDP) on the other hand appeared to be in sync with the decision to reschedule. Popular public opinion holds that if the elections had been held as initially planned, the APC would have come out victorious, perhaps inching towards a landslide. This impression was further alluded to by the likes of Dr. Frederick Fasehun, leader of the Oodua People’s Congress (OPC), in a speech delivered at a post-national conference forum on March 20.

The six weeks of postponement have afforded the ruling party a little more time to ramp up its campaign efforts, with a reported unrestricted flow of cash incentives to party loyalists and the public at large in a bid to secure sufficient votes to return the incumbent president, Dr. Goodluck Jonathan, to power. Public impression was that APC momentum had burned out, its campaign funds exhausted, to the extent that even campaign jingles via traditional media were few and far between compared with the PDP’s which appeared to have been heightened. Town hall meetings also became a major channel employed by both parties, reaching out to multiple voting segments.

Several conspiracy theories characterized the six week waiting period, chief of which was the alleged plan of the PDP to ensure that Prof Jega, the electoral body chairman, was removed from office via terminal leave on or before March 28. Three days to the elections, Prof Jega still remains the INEC chairman. Likewise, there was the war against the use of PVC’s and card readers, considering that INEC only decided to run a public sample test post February 14. The tenacity and commitment of INEC and its stakeholders met this opposition effectively, restoring public confidence in the use of PVC’s and Card readers as part of anti-electoral fraud initiatives. INEC continued to progress distribution of PVC’s to eligible voters and to date has recorded an approximate 82% PVC collection rate. This assumes that out of 68.8 million registered voters per 2015 Voters Register, 56.4 million have received their permanent voter cards.

The success of the military in its onslaught against insurgency in the North East has told its own story so far. Regardless, there are still major concerns surrounding the seeming ‘strategic’ timing of this recent wave – “why wait to do in 6 weeks what should have been done over 6 years?”

With the 6 week waiting period almost exhausted, it is natural to expect to see a shift in focus from conspiracy theories to election result forecasting on several bases and assumptions. Leveraging data from INEC’s Voter Register per geopolitical zone, assuming historic voting patterns adjusted to reflect current political sway, an average of 65% voter turnout in each State, admitting the influence of incumbent governors on their states, ongoing public response to party campaigns, and intuitive subjectivity, the table below presents an individual forecast of what may be expected. It is by no means the final result and cannot be so interpreted. Rather, it is a prediction anticipating several cross comparisons. This forecast predicts a majority victory for the APC in the presidential elections with 18.4 million over PDP 17.0 million votes. 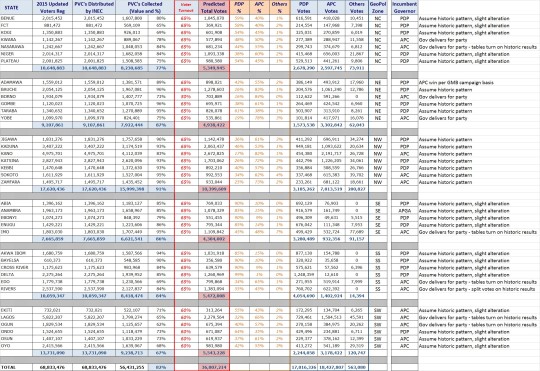 How to Join a Political Party

Information is power… a commonly referenced phrase. The world, at large is said to be in the information age. Clearly, knowledge is king in these digital times. An individual’s wealth of information and knowledge can very well distinguish him or her. Where it remains difficult to access knowledge, the bane of societal transactions results… information asymmetry. Information, in today’s world, must be available, accessible, verifiable and reliable.

Every now and then, one hears this question thrown to the public fore – “How do I join a political party in Nigeria?” “What’s the process to follow?” Naturally, when people require such information nowadays, a Google search does the trick, yielding as many results as possible, meeting the information need. However, a quick Google search for the process of joining a political party in Nigeria yields little or no information. Link to link, page to page, there is hardly a well laid out process for joining. So, for the politically minded Nigerian youth, interested in getting involved at the minimal level of party membership, information asymmetry is the first bottleneck.

According to the Independent National Electoral Commission (INEC) website, there are currently 25 registered political parties in Nigeria. 7 of these have listed websites, but only 2 are functional at the moment – PDP and ACN. Websites have become a basic and primary information channel. The PDP website alone includes a page on ‘How to Join’, detailing eligibility for membership and steps to follow at Zone, State, Local Government and Ward levels. No other party website provides this information. In a country with up to 135 million connected GSM lines as at December 2012, such information ought to be widely spread and readily available online and perhaps on mobile devices. The inadequacy of reliable and clear information in this regard has resulted in people depending on ‘word of mouth’ as an alternative source of information on how to join a political party.

The generally accepted and verbally communicated process of joining a political party in Nigeria is as follows: Interested individuals are advised to visit the respective party headquarters at their Wards and seek the attention of the Ward Secretary (Each Local Government Area is subdivided into Wards for political purposes). The individual will fill a party registration form and provide supporting documents and payment as may be required by the party. Once registration is judged to be complete, a membership card will be processed and issued to the individual as confirmation. Then, the individual is referred to as a ‘card-carrying member’. Political parties typically hold weekly Ward meetings which members are expected to attend. A simple process, yet, requiring increased awareness and widespread documentation.

The least expectation is that each political party manages a functional website, publishing therein its national structure – a breakdown of Zones, States, Local Government Areas and Wards with contact details for party officials at each level. An individual who seeks to join a political party should be able to pick an internet enabled mobile phone, browse the website for the party of interest, navigate the national structure down to the Ward closest to him/her, copy details of the responsible party official, make an inquiry call and/or physical visit. Information should be at the public’s beck and call. So, while the PDP site provides initial information on ‘how to join’, it needs to incorporate information and contact details down to the Ward level. It currently lists PDP State Chairmen with few of their contact numbers but excludes details on LGA and Ward officials.

The Lagos State Government has been kind enough to publish via its website, the list of all Lagos State LGA’s, respective Wards and contact details of the Chairman and Vice Chairman – a ready-made template for each political party to adopt. The Oyo State Government website has a similar list of LGA’S within the State. Unfortunately, there is no breakdown of the Ward structure for each LGA, neither are contact details included.

Moreover, each political party should fully explore and execute the option of online registration for prospective party members. The Action Congress of Nigeria seems to be the trailblazer with this concept and may be testing it already via its Join ACN Today link.

In enhancing our growing democracy, information on political processes and requirements for partial or total involvement must become readily available to the average citizen. The ease and speed of accessing reliable information are key success factors to increasing and improving political involvement especially for Nigerian youth.